Lives depend on how you do your job.
Lets do it right and save lives together - you and us!

JALITE safety products are used to help implement key elements of any Safety Management System in an organisation, especially relevant to the new ISO 45001 - Occupational health and safety (OH&S) management system. Key objectives are to meet and exceed legislative requirements. Especially the need to meet obligations of Duty of Care and Employment Law. To provide a safety management system and the essential safety training requires specific actions and JALITE products can demonstrate that actions have been taken instantly to any observer. JALITE Authorized Distributors, providing local supply and installation, assist clients to attain their safety management objectives and help training and knowledge on fire safety, health and safety signs and evacuation.

ISO EN BS 7010 Graphical symbols -- Safety colours and safety signs -- Registered safety signs is the Standard for all safety signs in the work place and for safety communications to the public. JALITE has worked for over 25 years as part of British Standards and ISO Standards Technical Committees to get the broadest acceptance possible around the world of the famous running man through the door with its unique supplementary arrow for the movement of people. Wherever in the world you can find JALITE safety signs to meet your needs.

More about this product

Find out more about our distributors

JALITE Authorized Distributors are chosen to be professionals in the safety field and have chosen the very best based on the shared total quality philosophy. The JALITE goal is to provide service and support locally in all the world geographies and application markets for photoluminescent safety signs and way guidance products. Call us to find an Authorized JALITE Distributor in your area and/or ask your best suppliers to deliver JALITE.

Want to know more about us?

JALITE wants to hear from you. E-mail us and ask questions! JALITE has been in business now for over 35 years with the Brand JALITE and we are proud to be the pioneers of all the main applications for photoluminescent 'See in the Dark' safety products. Just give us an e-mail inquiry and questions we will be straight back to you. Even ask the oldest question of all - How long does it Glow? - How long does it last? or How long is a piece of string?

All you need to know about safety applications and legislations

Where can you buy it? Find the nearest distributor!

Learn more About us

Find out about the team, the company and the products 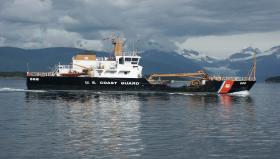 ATTENTION: The REVISED GUIDELINES FOR THE MAINTENANCE AND INSPECTION OF FIRE PROTECTION SYSTEMS AND APPLIANCES has been issued by the IMO. Member Governments are invited to apply the annexed Guidelines when performing maintenance, testing and inspections in accordance with SOLAS regulation II-2/14.2.2.1 on or after 31 May 2013 and bring the annexed Guidelines to the attention of ship owners, shipmasters, ships' officers and crew and all other parties concerned. You can view the revised guidelines here. Included in these guidelines are various system maintenance and tests to be performed at various intervals from weekly & monthly to 5 & 10 year maintenance.  Included in the test requirements are fire extinguishing systems such as fire mains and pump, foam and water mist systems as well as the Low Location Lighting on a weekly basis, and a 5 year test in accordance with the procedures in resolution A.752(18). The majority of these Fire protection systems have associated signs that may also need to be updated or replaced.  You can find the full range of JALITE FIRE CONTROL SYMBOL SIGNS on our website: www.jalitemarine.com. Contact JALITE to obtain a quote or find one of our authorized Marine distributors.

Are Nightclubs Safe?: The 10th Anniversary of the Station Nightclub Fire 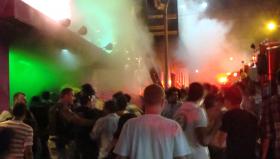 Bars and nightclubs all around the world are under close scrutiny after a fire broke out in Brazil’s Kiss Nightclub, killing over 230 people. The fire, which was started by pyrotechnics set off by a band performing at the club, bared an eerie resemblance to the now infamous nightclub fire that occurred just 10 years ago. On February 20th, 2003 a rock and roll themed club in West Warwick, Rhode Island called Station Nightclub was hosting the band Great White when the band's manager set off pyrotechnics. Although the band had set off these pyrotechnics inside of other venues, the Station’s low and flammable ceiling was quickly set ablaze by a spark that quickly engulfed the nightclub and everyone inside. 100 people lost their lives in the fire, with many more seriously injured. With Kiss Nightclub fire last month and the 10th anniversary of the Station Nightclub fire this week, can we really say that nightclubs have become safer in the last ten years? While many sites offer helpful tips for patrons, such as the NFPA which urges club-goers to check for exits and be aware of their surroundings, owners and employees also need to be aware of imminent danger. Bouncer Online offers 8 tips for owners and employees to ensure that everyone has a safe evening. Their tips include making sure that the club is not over crowded and checking that all emergency exits are clearly labeled and easily accessible; two safety violations that experts say most commonly lead to a high death toll in theses nightclub tragedies. Ensure your nightclub clients are keeping the customers in your community safe, provide them with Jalite Safety signs such as our UL Listed EXIT Sign, and door hardware signs. When the lights go out, ours go on.™ Way-guidance floor signs and notices to Keep Exits Clear are also to be advised. All will shine up so nicely with Night club blue lights!! 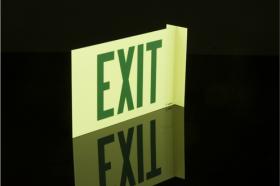 JALITE OSHA Compliant Exit Signs meet OSHA Federal Register: 1910.37 (b) (4) and 1910.37 (b) (7). They reliably identify the direction to the nearest exit under both normal and emergency conditions. JALITE Exit signs have both left and right peel-and stick chevrons provided to indicate the correct direction of travel. They are also available in the Flange Sign or Flag sign option double sided for optimum visual attributes in corridors. JALITE OSHA Approved Exit Signs meet and exceed all of OSHA's requirements for Exit signs. Ensure your workplace is fully compliant with OSHA regulations using the appropriate JALITE OSHA Approved Exit Sign. 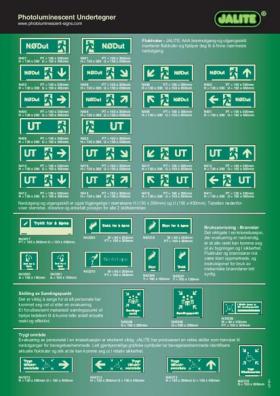 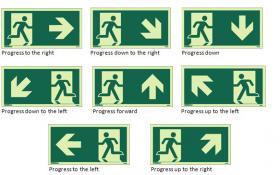 Fire Safety Sign Audit & Review To provide a visual inspection (up to an hour), whilst on site, of the fire safety signs within an agreed scope that can include Means of escape route identification signs Emergency door opening devices signs Mandatory fire door notices Fire action notices Fire fighting equipment location and type identification Specific hazard identification signs (limitation to be agreed with client, such as mind the step hazards on means of escape route, main electrical intake) Specific prohibition notices (limitation to be agreed with client, such as  do not use the lift in event of fire) Assembly point location signs The Audit would look at the provision of fire safety signs expected to be in place for compliance with Legislation and Regulations.  This would include the existing signs and making an observation as to whether additional signs would be required.  In order to meet the requirements of legislation best practice advice would be given based on the relevant National and/or International Standards relating to the types of signs and their design. The Audit would be followed up with a short report which can include; Reference to the particular piece(s) of legislation needed to comply with Relevant Standard/Code of Practice recommendations are based on Without going into specifics whether or not their signs will meet current regulations.  This could be split into specific types of signs Whether additional signs would be required Whether some existing signs could be removed, including internally illuminated signs to reduce on-going energy consumption Whether or not a full fire safety signs survey would be recommended

The Key to Tunnel Safety: Getting Out 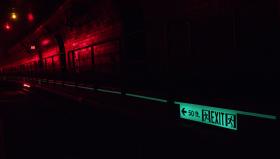 At 8pm the evening of August 10, 1903 in Paris’ popular Couronnes underground subway passengers anxiously awaited to make their way home. Then an empty train that had caught fire made its way into the station. While at first thought to be under control, the fire soon grew and overwhelmed the stations. With the power cut and smoke quickly spreading, it claimed the lives of 84 people. While this is one of the earliest tunnel tragedies, it certainly wasn’t the last: - On November 18, 1987 31 people were killed when a similar fire broke out in the King’s Cross tube tunnels when they became disoriented and trapped by darkness and smoke. - On March 24, 1999 truck fire in the Mont Blanc Tunnel in the Alps killed 38 people who were trapped in the tunnel and unsure of what to do. - On December 2, 2012 the collapse of the Sasago Tunnel in Japan killed 9 people and trapped many more when concrete paneling from the ceiling of the tunnel collapsed and ignited vehicles below. Preventing such tragedies may not be possible, but there are ways to prepare for them that enhances the safety of our citizens using tunnels. According to the US Fire Association the number one cause of death in a fire is smoke inhalation, not the actual flames. As was the case in the tunnel disasters stated above: inhaling toxic smoke was the leading cause of death. Knowing how to exit is key to surviving any fire and it’s no different in a tunnel. AAA.com has a safety checklist for what to do if in a tunnel emergency. In the event of a fire the checklist states that you should not try to extinguish a car fire unless it has just started, and if it is not possible to extinguish the fire to leave immediately through the nearest emergency exit. Photoluminescent markings provide a reliable and highly visible way to identify exits throughout a tunnel. Charged by the ambient light they’re always ready for service. That’s why you’ll find JALITE egress markers and safety signs light the way in many tunnels today. Such tunnels include: - The Hindhead Tunnel in London, England. - The Cross Harbor Tunnel in Hong Kong, China - The SeaTac Tunnel in Seattle, Washington - The Lincoln Tunnel in New York City, New York - And more!

Before choosing a supplier of safety signs it is essential to have some knowledge of the risks, the legislations and the standards of best practices for safety signs.

Take the quiz about safety

JALITE Authorised Distributors share the JALITE philosophy of providing best practice advice and guidance in the selection of product and in supply, installation, service and maintenance.

JALITE products are found from professionals in the fields of property management and maintenance, fire protection and fire prevention service companies, safety product supply companies and other specialist sign companies.

If you are seeking a qualified JALITE distributor near you just fill in the below enquires form.

Jalite is active in over 109 countries

In the 35 year history of JALITE, products have been developed and supplied to over 100 countries in the world and often with safety messages in the local language or with dual language, with the International Safety language English. It has been a JALITE tradition to fully comply with National and International Standards for the design of our products. Now, with JALITE presence on three continents and Authorised Distribtors world wide we can be considered local throughout the world. Interested to Distribute JALITE products in your area of safety or your district and country? Just send us a mail and contact us now with an introduction.